Pre-Fab Fireplaces: From a Fire Investigator’s Point of View


As a chimney business owner since 1982, and as a State Certified Fire Investigator since 1999, I have had the opportunity to investigate the cause and origin of many residential fires related to chimneys.  One of the major causes of chimney-related structural fires in my opinion is the Pre-Fabricated Fireplace. 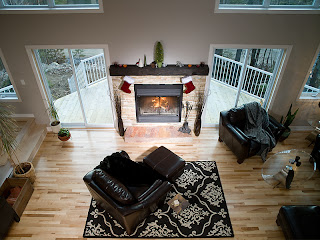 Lets address failures due to improper installation by installers first.  I can’t tell you how many investigations I have done where this is the scenario: The header is installed right on top of the firebox, the wall studs are installed touching or nearly touching the appliance, combustible walls are installed touching the firebox.  And that doesn’t begin to address any part of the system above the firebox, which can include improper termination caps that restrict cooling of the pipe, improper clearance to combustibles at termination, or to the chase itself.
Builders habitually do not properly train fireplace installers, as can be attested by every chimney sweep/technician across the country.  How many fireplaces of any type are 100% correct?  How many do you see that have a major problem?  There are many hidden violations that a normal inspection will not show, and it can be expected that at least 50% of the fireplaces will have a header or stud in the wrong place just waiting to ignite, or a missing attic insulation shield.
Missing parts can be a major fire hazard.  At a recent fire investigation a local installer admitted to installing all of his fireplaces without attic radiation shields, and had been doing so for 25 years.  Attic insulation or radiation shields keep blown-in insulation from falling in around the pipe or onto the top of the fireplace, where it can smolder and ignite nearby combustibles.  That means there are a lot of unnecessary house fires that are likely to happen in Kansas City.  How many other installers have done the same thing - throwing out parts that they thought were unnecessary?  How many installers are not properly trained or NFI Certified?


In addition, installation requirements may be too lax as I have also seen instances where all clearances were adhered to by nearby wood structure pyrolized and caught fire anyway.  Therefore,  the clearance to combustibles requirement by many manufacturers may not be stringent enough and should be expanded.  What this exact measurement should be I don't know, but any extra air space would surely assist greatly with the problem.
A multi-million dollar loss at a Kansas City, Missouri apartment complex  was due to improper installation.  This story was related to me by a Kansas City Fire Marshal—I did not see it myself.  He told me that they discovered that a pre-fab fireplace was installed with absolutely no clearance to combustibles and was sitting on wood studs.  In fact, ALL of the fireplaces were installed in this manner by a large contracting firm in each of the 300 apartments that were only 6 months old.  One of the units caught fire underneath the fireplace and caused a fire that swept through one entire section of apartments.  The builder was called back to remove and properly install all of the fireplaces.  10 million dollars in property damage was paid by the insurance company.


As far as homeowner use of the appliance, this is a bigger problem than many people imagine.  I have seen $500,000 homes burned to the ground because homeowners simply do not know the difference between a masonry chimney and a pre-fabricated (manufactured) fireplace and treat them the same.  There are far too many people who burn fires nightly, and some who I consider to be “pyromaniacs” burning anything they can get their hands on in their fireplace.  Pre-fabricated fireplaces are designed to be used for small, ambient fires only, as stated in most owner’s manuals.


But how many homeowners actually read the manual?  And when the house is sold to another party, is the manual handed down to the next person?  Most people have never seen a fireplace operation manual.  Realtors certainly don’t know what to tell buyers—all the buyer cares about is that there is a fireplace in the house, which, incidentally, is one of the most asked for features by buyers of real estate.  How may of those buyers are moving from a house with a masonry fireplace or wood stove and burn wood in their new pre-fab in the same manner?


Here’s a case in point: Ten years ago I was called by the Fire Marshal of a Missouri city to investigate a fire involving a chimney.  When I arrived, I was told by someone that the fire was “suspicious” and the new homeowner was suspected of starting the fire himself.  This information should never have been given to me, but I did my job without considering this.

I found out that the homeowner had just moved into the home on a Friday and the gas company failed to arrive and turn on their heat on that day, so they had to go the entire weekend with no heat.  The homeowner decided to use the fireplace as a heating source and kept the fire burning for nearly three days.  On Sunday, the interior walls ignited and eventually burned one side of the house down.  I showed the evidence to the Fire Marshal and insurance adjuster, who realized that I was correct.  The house was three years old, and the homeowner had not been given an owner's manual on the pre-fab fireplace, which is designed never to be used as a heating source.


Tips:
- Prefabricated (Manufactured) Fireplaces are designed for small, ambient fires only
- Never replace the grate with a larger grate or overloading and fire can result
- Only use replacement parts from the manufacturer
- Never use masonry glass doors on a manufactured fireplace
- Have the fireplace chimney swept and inspected annually by a professional chimney sweep
- Use steel studs around the firebox and use all parts that come with the installation kit
Posted by Margie Kay at 2:13 PM