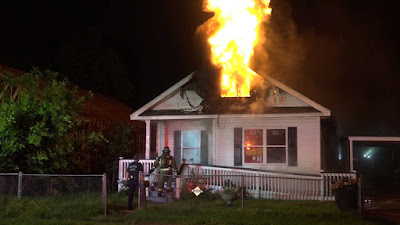 Many house fires occur due to flammable bird or squirrel nests in or around chimneys. On Monday, February 10, 2014, Gene found a nest that was built on top of a direct vent gas fireplace vent on the exterior of the house.  The nest and wood house siding was charred, which means that the nest was trapping heat in an area that needed to be clear of obstructions. Heat chemically changes the structure of wood over time and lowers the ignition point. Where wood normally ignites at approximately 500 degrees, wood exposed to heat over time may ignite at only 180 degrees or lower. In this case, the homeowners were lucky to have had service done to their appliance when they did or it would have gone unnoticed and eventually caused the house to catch fire.

Shortly after the above inspection, Gene inspected another direct vent gas fireplace and found another bird nest packed tightly inside the holes in the vent. The homeowners had no idea that birds could get behind the vent cover and build a fire hazard inside the vent. It is a good thing they decided to have us do an annual gas appliance check and tune-up or it wouldn’t have been found.

Birds and squirrels love to build nests inside and on chimneys where they have some protection from the elements, and heat to keep warm in the winter. Unfortunately, nests are built with flammable dry twigs and other materials that can easily catch fire and cause a chimney or vent fire that may become a house fire.

In 2013 we did a fire investigation involving an unlisted decorative shroud on top of a wood chimney chase serving a manufactured fireplace. The shroud contained over five-gallon buckets full of squirrel nesting materials that were packed down inside the shroud and not visible from the ground. The materials trapped heat inside the area, which in turn ignited the combustible framing. According to the International Residential Code, only shrouds listed for the particular manufactured appliance may be installed.  Unfortunately, there are many architects and builders who design unlisted shrouds to cover ugly chimney termination caps which do not have a listing and are potential fire hazards.  As chimney sweeps we need to be diligent about checking for listed and labeled shrouds and removing those that are not listed.

We had an unbelievable case about 18 years ago which involved the removal of over 20’ of squirrel nesting material inside a clay tile flue liner. It took two men two trips to get all of the material out with many types of equipment. They were almost to the point of tearing the chimney down when they finally broke through the packed materials. The squirrels apparently used the same location year after year and built a new nest on top of the old nest until reaching the top.  Luckily, the homeowners had not used the fireplace for many years and called us to inspect it before using it.
In yet another fire investigation case in 2012, Gene found the cause of a fire to be bird nesting material packed inside an older model manufactured chimney pipe that was designed without adequate protection against birds.  Birds built the nest between the inner and outer pipe sections and on top of the chase top.  This blocked the air-cooled chimney and caused it to overheat, ignited nesting materials, which in turn ignited nearby combustibles several inches away.  This is something to look for in older model pre-fabricated fireplaces, and unfortunately, there are many of these types of fireplaces still in use.

In 2013 we did an inspection of a manufactured fireplace unit that had bird feathers and nesting materials coming down the flue and through a gap at the bottom of the pipe. Further inspection revealed that nesting materials were packed between the inner and outer chimney walls. We advised the homeowner, who only wanted a screen installed to keep the birds out, that the entire system was a fire hazard and needed to be replaced. This started a huge controversy and she left negative feedback on Angie’s List.  I’m sure it’s just a matter of time before the house burns down. The sad part about this case is that another chimney company did install a screen on the chimney cover for her and did nothing else.  What we say when this happens is “They just bought that chimney,” which means to fire investigators that the last person to touch it is the first person the insurance companies go after.

Chimney swifts are especially drawn to dark, cool masonry chimneys and build their nests with mud and twigs on the sidewalls of flues and smoke chambers. In the U.S., the Chimney Swift is protected by the Migratory Bird Treaty Act of 1918. Neither birds nor nests can be removed from chimneys without a federally-issued permit. Other birds build nests on the smoke shelf or damper. All nests are flammable and are a fire hazard. Unfortunately, the Migratory Bird Act prevents homeowners or chimney sweeps from removing nesting birds of any type inside chimneys, and substantial fines may apply per occurrence.

Posted by Marge Padgitt at 4:20 PM