Utility flues serving furnaces, water heaters, and boilers are often forgotten and ignored, yet can pose serious hazards for the occupants of the home. Most problems lie with older masonry chimneys with clay tile flue liners, or chimneys without liners. Homeowners are generally not aware that these flues need to be inspected annually as recommended by the National Fire Protection Association 211 Standards, and that professional chimney sweeps maintain these flues. HVAC contractors do not sweep or inspect flues, or install replacement flue liners. 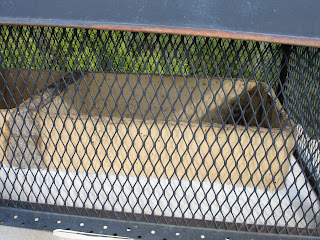 Masonry chimneys deteriorate over time, starting from the interior, due to exposure to rain and acidic flue gasses, which damage mortar and clay tile liners. Over a period of years, this mortar falls and accumulates at the bottom of the flue, sometimes causing large restrictions that can cause carbon monoxide backup. Flue liners have been required by code since 1927, yet many homes built prior to 1950 do not have liners. Flue liners are installed to provide a complete sealed exit for toxic flue gases. They have mortar joints between each two-foot section of tile. But mortar joints that are deteriorated, have holes, or are missing can allow gases to escape the flue liner and enter the living space via a neighboring flue liner serving a fireplace, or through the masonry chimney. 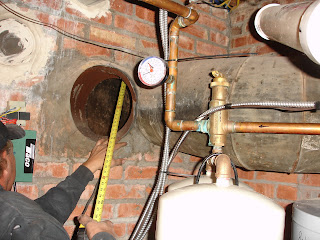 Masonry chimneys are designed to last for many years as long as they are maintained. However, lack of homeowner education usually results in improperly maintained chimneys and flues, which can be a health hazard to the occupants and cause appliances to work inefficiently. Flue liner size is very important – and must be correct in order for draft to occur. A flue liner that is too large for the appliance may cause backup of gases. This is common in homes where newer, mid-efficiency appliances have been installed which need a smaller liner, and in cases where a high-efficiency furnace is installed and vented through the side of the house, leaving an “abandoned” hot water heater to vent on its own in a flue that is very over sized.
Carbon monoxide is an odorless, tasteless, colorless gas that is the by-product of incomplete combustion. The current standard for CO alarms is 9 ppm, however, recent testing proves that even very low levels of CO exposure over a long period of time can cause irreversible brain and organ damage. The Environmental Protection Agency states that CO detectors are to be used as a backup and are not a replacement for maintenance of appliances and flues. Even so, the EPA recommends the use of CO detectors placed strategically throughout the house.
Dr. David Penney, author of Carbon Monoxide Toxicity and Professor of Physiology, Wayne State University School of Medicine has devoted years of research to this topic and posts his findings on his website at www.coheadquarters.com. Penney suggests that SIDS may be due to low level CO exposure and that children, the elderly, and pets are more susceptible to its effects. 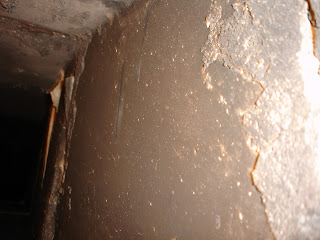 According to the Center for Disease Control, 15,000 people visit emergency rooms and 500 people die every year due to CO poisoning. Symptoms of CO poisoning may include flu-like symptoms that go away or lessen after leaving the house, unexplained headaches, nausea, and dizziness; fainting, muscle weakness, inability to wake up, and death. If more than one family member has the same symptoms the EPA recommends visiting a doctor or hospital and mentioning that you suspect CO exposure.
Spalling flue liner with missing mortar joints
Utility flue safety tips:
According to a chimney sweep in Kansas City, Missouri, he has encountered numerous utility flue problems over the years, citing that it is a common issue. “People don't think about the inside of their chimney and it is usually ignored until a chimney sweep finds a problem or someone gets ill,” stated the sweep. In one example, another chimney sweep broke out flue tiles and left them in the flue, clogging it completely, which made the homeowners very ill for weeks. In another example, over five feet of debris was removed from a boiler flue that had not been maintained for years and had blocked the flue by 90 percent. The clog caused an entire church congregation to become very ill.