The Midwest Chimney Safety Council held its first-ever Bake Oven Building Workshop June 2 – 5, 2011 at the home of Kirk and Sally Scott in Cedar Hill, Missouri. Kirk and Sally have served on the MCSC board of directors for years, and had the perfect spot on their property for a permanent outdoor bake oven. In fact, they had room for two ovens, so it was decided that a brick oven and a cob oven would be constructed. 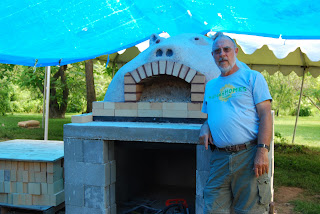 Gary Hart, owner of Aaron's Ltd, in High Ridge, Missouri was the lead instructor for the Cob oven building project. Gary is a Certified Heater Mason by the Masonry Heater Association of North America. The MHA has conducted many workshops on bake ovens over the years and most heater masons also build bake ovens.
Cob ovens are usually made with clay, sand, and straw. The base or support for the oven can be built with stones, blocks, bricks or even a portable wood frame on wheels. In this case, Kirk built the bases out of blocks on 6-inch+ thick concrete foundations before the workshop began in order to save time. Clay can be purchased from a brick supplier or dug out of the ground. Gary purchased clay for this large project to save time.


The process involved installation of an insulation layer on the base, then building a wet sand dome to support the cob oven structure, laying damp newspaper over the sand dome and a “slip” or coating of clay on top of that. Then the fun began. Clay was mixed with water on a plastic tarp and the workshop attendees took off their shoes and stomped through the mixture until it was of a good consistency. Straw was added and mixed in the same manner until the materials was uniform. The ideas was to get the clay to a workable consistency without being too dry or too wet.
Finally, the cob was applied to the sand dome to cover it, being careful not to change the shape of the dome. The cob can be shaped as desired, and in this case was made into a pig, which was appropriate not only because of the large size of the oven, but because of what is likely to be cooked in the oven later. Gary built a brick arched opening to allow for a door to be installed.
Cob ovens are good for heating and cooking meals quickly. They are fairly easy to build, (especially with lots of help) inexpensive, and will last for years if protected from the weather with some type of roof or covering. However, cob ovens do not retain heat for like brick ovens do and are considered to be less permanent. Expect to do repairs to cracks in the cob once in a while. Average time to build: three days. 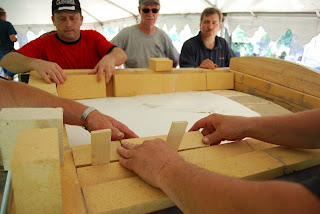 Gene Padgitt, Certified Heater Mason and V.P. of HearthMasters, Inc. in Independence, Missouri headed up the brick oven building project. Gene builds commercial and residential brick ovens, and had learned about a new oven style designed by Pat Manley, owner of Brick Stove Works in Washington state. Gene used Pat's design and modified it slightly for this project.
Foamglass insulation was installed on the base first to keep heat on the oven floor rather than allowing it to travel through the concrete blocks. Next, the oven floor was built out of firebrick without mortar to allow for expansion and contraction. This method also makes it fairly easy to replace firebrick in the future. Then the walls, arched doorway, landing, flue outlet, chimney, and finally the dome were built with firebrick. Forms are pre-made out of wood to support the brick arch and sized exactly to the calculations for the dome. Measurements needed to be exact and levels used throughout construction. A steel door was fabricated by a sheet metal company for use in this oven, but a wood door could also be used. Finally, cladding was installed over the dome. Cladding is insulation made with reinforced concrete and poured over the aluminum foil covered dome. This must set up for two weeks before adding the exterior face. A steel frame was installed for roof installation to protect the oven from the weather. 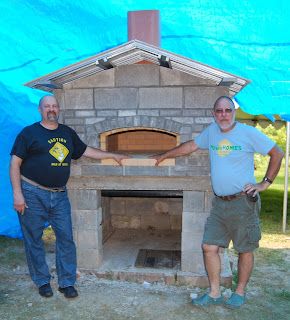 Brick ovens are permanent structures designed to retain heat for long period of time and can attain a high temperature. Brick ovens are perfect for cooking pizza at 600-700 degrees, or meals and breads at lower temperatures. Since they retain their temperature for long periods many people plan to cook for an entire day once the oven has been fired up. Brick ovens use more expensive materials than cob ovens and take longer to build. This type of oven should be built by an experienced mason. Average time to build: two-three weeks.
The exterior finish work on a brick oven can be brick, stone, stucco, man-made stone or tile. The exterior finish work on this oven will be completed at the next MCSC workshop in May or June, 2012, which will include instruction on how to cook in a wood-fired oven by a professional baker, flashing techniques, anda first aid course.
Watch www.mcsc-net.org for information on the upcoming workshop.
Posted by Marge Padgitt at 3:53 PM