Drought Can Cause Chimneys to Lean

The drought we've been having in the Midwest the past few weeks has caused major problems with a lost of masonry chimneys. As dirt pulls away from the foundation of a chimney it can cause a chimney to lean, which is a problem that needs to be addressed as soon as it is noticed by the homeowner.

We are seeing a lot of leaning chimneys these days. This project is on a 100-year old home Kansas City, Missouri, that required tear down and rebuilding of the stone chimney. We poured a new foundation, rebuilt a frame wall on the house to bring it back into plumb, and are currently rebuilding the the chimney using stone at the base, and a stone/brick combination further up. The chimney had moved 14”out of plumb, was bowed out in the center, and was in severe danger of collapsing. The homeowners were concerned that it was a safety hazard, and indeed it was.
Where chimneys are leaning 3” or more, piering should be completed by an experienced professional, however, be sure to contact a company that does piering first, rather than just Mudjacking. Mudjacking is the process by which a mixture of cement, dirt, and water, or lime and water is pumped underneath concrete slabs to restore them to their original position. It is used to stabilize settling concrete such as sidewalks and patios that are non-load bearing structures.

In the case of a chimney, mudjacking should never be used alone because it cannot support the weight. Push piers should be installed first to lift the masonry to a level position, then mudjacking can be done to fill the empty space under the footing. Piering is a permanent repair solution. Excavation is done around the foundation, brackets are installed on the foundation and under it, and the pier is attached to the foundation with bolts. Hydrolic hoses are attached, and sections of pipe are pushed into the ground to solid bedrock. Multiple rams are then lifted in unison to the desired height, then back-filling or mudjacking is completed. We have developed relationships with local piering contractors we feel comfortable recommending to homeowners. These contractors also refer business to us. In fact, they have changed their contracts to include risk of damage to the chimney interior and that it should be inspected by us after their work is completed. ﻿﻿
Watch out for the hidden leaning chimney – one that has trim work on the exterior added to conceal a space between the chimney and the house. We've seen some trim added that was 1” wide at the bottom and 6” wide at the top. Signs of chimney movement can also be found at the flashing area, where you may find flashing pulled out of place or large gaps. The homeowner may also complain of a leak.

Anytime a chimney is moved it is likely to have interior damages that can be a fire hazard, so it is imperative for the homeowner to call a qualified chimney sweep to inspect the interior using an interior camera system. If cracks in flue tiles or shifted flue tiles are found, relining will be necessary. When a chimney pulls away from the house, a gap is usually left behind the facial wall of the fireplace, which is not a structural part of the chimney. This space can allow heat to escape into an area where there are likely combustible framing and headers, so a gap here can be a real fire hazard. It is common for masonry chimneys to shift or settle slightly, so this is an area that needs to be inspected at the time of any chimney evaluation and if gaps of any size are found they should be packed in with mortar.
We've also seen some rare instances where a chimney leans in towards a house, and that presents a more difficult problem because access to the foundation is not as easy. The solution is usually to tear the chimney down and rebuild it.

When a chimney starts to show structural failure with cracks in the masonry or bowing of the masonry, or if the structure has shifted far out of plumb, the chimney needs to be taken down completely and rebuilt. Homeowners should consult with a chimney construction specialist or structural engineer if they are in doubt about what to do, since there is a “gray area” where the solution could be either piering or rebuilding, and is a matter of opinion. 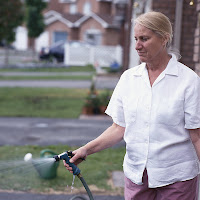 Homeowners can help prevent chimneys from leaning by thoroughly watering the foundation every two or three days during drought in order to keep clay and dirt packed against the foundation.


For the safety of our crew (and to protect the neighbor's house), Gene set up special supports using the neighbor's stone porch as a counter support during the tear down process. The supports were constructed using $250 worth of 4” x 6” x 16' lumber (see photo). This is usually not required, but it is a useful technique to know. The lumber can be reused. The crew set up roof protection and scaffold with safety rails and walk-boards installed, and removed all of the stones from the chimney one at a time from the top down. This is the only way to safely tear down a chimney. A commercial dumpster was placed on site for debris removal, however, most of the stones were still in good condition so they were saved and reused.


Next, the footing was poured using high strength cement with rebar crisis-crossed 6” apart in the cement. This is tied into the existing foundation of the house. A block foundation was next, then the fireplace, which the homeowner wanted a certain size fireplace measuring 24” x 36”.

The finished chimney is below: 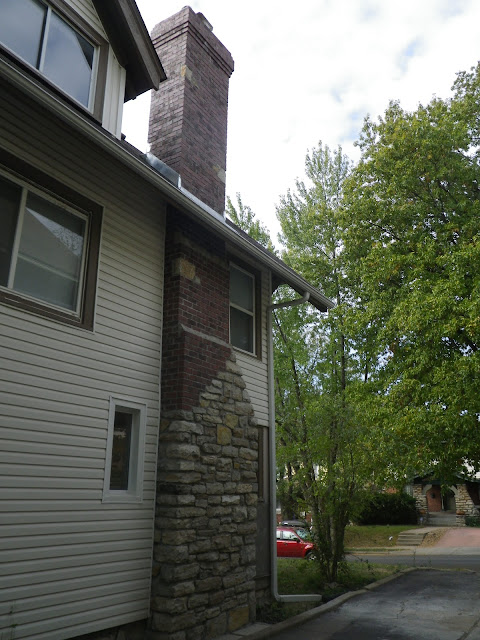 Posted by Marge Padgitt at 11:43 AM No comments: 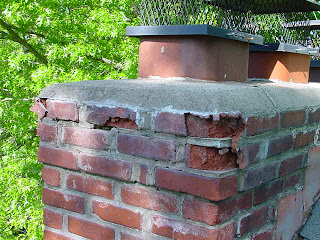 When chimneys spall, it is a sign of severe moisture penetration of the masonry bricks or stone. Spalling is the flaking off of a brick or stone surface, and is evident when the face of the masonry is missing. Pieces of bricks or stones may be found on the ground or on the roof, which is an indication that there is a problem. This is a common issue in the Kansas City and Midwest area. 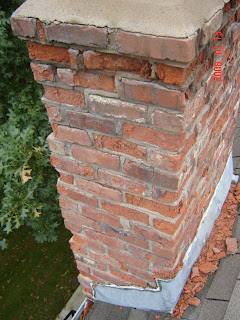 Spalling is caused when the masonry absorbs too much moisture from rain and is subjected to freeze/thaw cycles. Damages can be exacerbated by condensation of flue gasses in improperly sized flue liners and gaps or cracks in mortar joints on the interior of the chimney, and by moisture entering the interior of the chimney chase from the top at the cement crown area where cracks or gaps allow water to enter.   If the cement crown is not built with a poured crown with 2” overhand and drip edge per code, damages to the top of the chimney structure will occur more quickly. However, builders seldom build poured crowns due to the added time and expense involved.


Soft type brick is more susceptible to moisture penetration than hard type bricks, but builders often use soft brick because they are less expensive. When building a new home, homeowners should request that hard bricks be used in all construction so they will last many years. 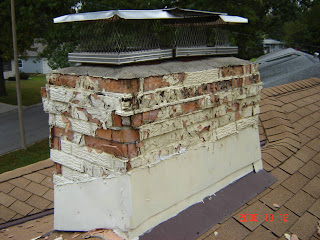 Chimneys usually show damages more extensively because they are more exposed to the elements than the rest of the house. The top portion of the chimney will show the first signs of moisture problems. By the time bricks or stones spall, the damage is done. Spalled bricks or stones cannot be repaired and must be replaced. It may be tempting to save money by replacing spalled bricks and doing partial rebuilding of a chimney, but keep in mind that the entire chimney will need to be rebuilt at some point, so any partial repair is a temporary fix. 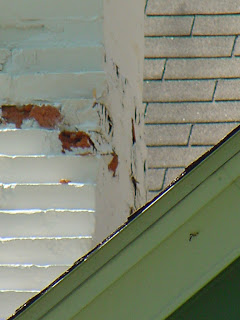 Painting chimneys is never a good idea. This servies to temporarily cover up the problem, but will speed up the deterioration process since the bricks can't breathe.  Buyer beware if you see a painted chimney.


To find a qualified chimney restoration contractor in the greater Kansas City area visit the Midwest Chimney Safety Council or the Masonry Heater Association of North America website.
Posted by Marge Padgitt at 10:00 AM 3 comments: