Types of wood to burn in a fireplace or stove 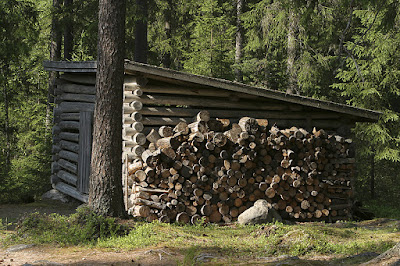 Choosing the right type of wood and drying it properly is important to the operation and performance of a wood-burning appliance. Green firewood may contain 50% or more water by weight. It produces less heat because heat must be used to boil off water before combustion can occur. Green or wet wood also produces much more smoke and creosote than dry wood. For these reasons—never burn wet wood.

Firewood should always be purchased dry or allowed to dry before burning. The best way to assure this is to purchase or cut it down it at least six months in advance and leave it in the woods, then stack it and leave for another six months so you know it is dry. Leaving the cut wood in the woods for six to twelve months allows the oils to dissipate and any bugs or critters will leave the wood and not travel home with you.
Stack wood in an area that gets a lot of sunlight rather than shade. Orient wood so that the cut ends face the direction of the prevailing wind. In the Unites States wind usually moves from west to east but if you live in a valley it may be different based on warm air rising, so face wood in the direction the deer move.
Be mindful of what your woodpile looks like as the neighbors may complain to the city if it is unkempt, or offer praise your it is straight and neat. If you really want to impress passersby, stack the wood in a cool design (there are some amazing creations on the internet).
The woodpile should be kept off of the ground to avoid rot. This can be accomplished by using bricks, blocks, or treated 4 x 4’s placed  lengthwise on the ground.
Arrange wood with gaps between the pieces so that air can circulate. Stack split pieces bark side up to shed moisture. To support the pile use a purchased holder or standing trees, fence posts, or rebar driven into the ground. Stack in one log thick ricks for faster drying. The old myth about keeping the wood pile some distance away from any buildings to avoid termites and carpenter ants is not true. The queen lives underground and without her the critters are harmless. However, brown recluse spiders do love woodpiles so that is reason enough for me to keep the wood pile at least 25’ from the house. Always use gloves to handle wood to avoid an unwelcome bite.
Be sure to make a roof of some type, whether from a tarp or even a roof built of shingles to keep water and snow off of the wood, keeping in mind that the sides need to be open to allow for air movement. More industrious wood burners may want to build a more sturdy and permanent structure with posts and a roof. 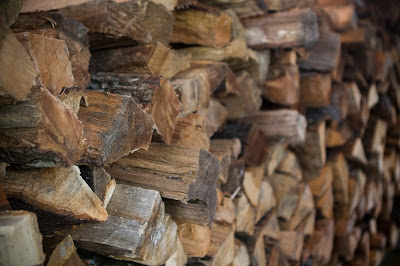 When bringing wood indoors for use, leave it near the stove or fireplace for a couple of days to further remove moisture (keep wood at least 36” away from the opening).
The difference between soft woods such as fir, cedar, or alder and hard wood such as white oak, mulberry, or walnut is density. The heavier hard woods contain more heat per volume, therefore less wood is needed and loading (putting wood on the fire) is needed less often. This is especially important for wood-burning stove users because the burn time is longer.
Some firewood dealers sell "mixed hardwood" or mixed soft and hardwood” firewood. This may or may not be desirable, depending on the proportion of low- density hardwoods that are included., so be sure to ask what types of woods will be in the mix. Softwoods are less deisreable, so the price will be less than for hardwoods.
When purchasing firewood be sure to ask if you are getting a full cord, face cord, rick, or pickup load as the volume varies greatly. A full cord measures eight feet wide by four feet deep and four feet high and is 128 cubic feet in volume.
Firewood has been bought and sold this way since colonial times. A face cord, sometimes called a rick, measures eight feet wide by four feet high by depth depending on cut length. Cut length is usually 12—18” long. You may request cut length at the time of purchase to fit your stove.
A pickup load is generally 64 cubic feet in volume depending on if it is stacked or piled in. A randomly piled load will have less wood content. Ask the wood dealer if he will split the wood for you and if not, you will need to split the larger pieces so they will dry out properly.

Basically, all wood has the same BTU’s per pound, but serious wood-burners use an appliance such as a wood-burning stove or masonry heater burn hardwoods which offer a longer burn time and less time splitting. Hedge and Hemlock are not recommended due to the amount of sparks emitted. Hedge burns very hot and can damage wood-burning stoves. If you must use hedge, mix with other wood types. 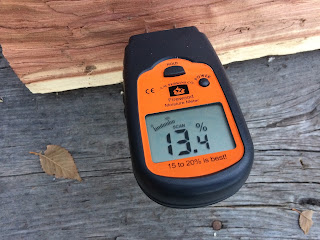 To be sure wood is dried to 20% or less moisture content use an inexpensive moisture meter to test it. If no meter is not available bang two pieces of cut wood together. If they sound hollow and loud, the wood is dry. If the sound is a low thud the wood is still wet.
You’ll need an axe, a set of splitting wedges, and a maul in order to split your own firewood. To make the task easier, purchase a manual or hydraulic log splitter ($40—$200), or a gas-powered log splitter ($1,000 +). More serious wood-burnings will want to invest in a good log splitter that will last for years.


Make kindling by splitting some cordwood up into very small pieces. Dry pine is great for kindling purposes.  Fatwood is a very good fire starter with only 2-3 pieces needed to start a fire using one match. Fatwood is derived from the heartwood or center of pine trees and is loaded with pine resin which is very flammable. Harvest fatwood from the center of pine stumps or purchase from hearth dealers or chimney sweeps.
_____________________________________
Marge Padgitt is the president of HearthMasters, Inc. chimney and fireplace contracting company. She is an industry writer and speaker. Contact Marge at hearthmastersboss@gmail.com.
Posted by Marge Padgitt at 10:20 AM No comments:

What you Should Know about Chimney Fires

Posted by Marge Padgitt at 5:07 PM No comments: